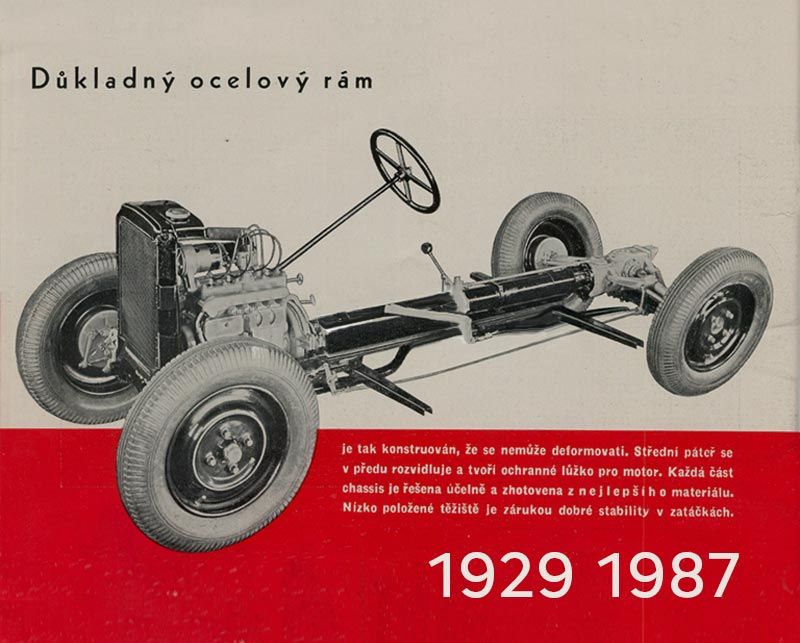 125 Years of Škoda: A New Generation of Automobiles

This year sees the 125th anniversary of ŠKODA. The success of ŠKODA is partly down to the countless technical innovations the company has made during its 125-year existence. This week we look some of the production changes made in the 20th centrury.

1929 The switch to production lines

From 1927 to 1929, the foundations of efficient production lines were laid, benefiting from standardisation, with parts that could be used in multiple vehicles, and specialisation, with employees focusing on a particular activity. The most modern production line in Czechoslovakia was inspired by the USA and was intended for a new generation of ŠKODA automobiles. It went into operation shortly before the Wall Street Crash. The far-sighted and thorough transformation of the company enabled it to avoid the kind of collapse that affected many of its competitors. A few years later, ŠKODA even came out of the crisis stronger.

The radical modernisation of production technology making it possible to increase the factory’s capacity while improving efficiency was logically followed by another step: the development of an entirely new generation of automobiles. Their progressive design brought major reductions in vehicle weight, which saved hundreds of kilograms of material and delivered other benefits like lower fuel consumption, lower price, slower tyre wear and better handling properties. The ŠKODA POPULAR, RAPID, FAVORIT and SUPERB family of cars was built on a central chassis backbone that replaced the conventional rectangular frame resembling a horizontal ladder. Fixed axles that caused the wheels to bounce around on uneven surfaces made way for independent suspension that came as standard on even the marque’s cheapest models.

1945 From private ownership to a state firm

The Mladá Boleslav motor works became a public company before World War II, which brought an injection of money for investment. But after the war, major industrial, financial and other companies were nationalised in Czechoslovakia, as in a number of other European countries. What’s more, the firm was renamed. From 1 January 1946 its official name became AZNP, which stood for Automobilové závody národní podnik (“motor works state firm”). All important decisions about investments, manufacturing, pricing and other key matters began to be taken by the state.

1952 From timbering to all-metal bodies

1952 brought one of the biggest changes in AZNP’s manufacturing technology, removing a major obstacle to genuine mass production. After almost half a century, the bell tolled for joiners who prepared the timbering for the body’s load-bearing frame. An all-metal structure welded together from pressed sheet metal parts was first used on the ŠKODA 1200, which was the culmination of four years’ intensive development. The body design also changed to an exterior pontoon body with integrated mud-flaps and a wider interior than before. Passenger cars were followed by light utility vehicles, including the typical ambulance designs from the Kvasiny plant.

1964 Engine moves from front to rear

A new part of the production plant at Mladá Boleslav was officially opened in March 1964. It was equipped with state-of-the-art technologies that made it possible to increase annual production levels from around 40,000 vehicles to 100,000 and more. The product itself was completely overhauled as well, though. The classic design with an engine mounted at the front and powering the rear wheels by means of a long shaft gave way to a much more compact, simple and light “all at the rear” design. The space under the front hood could thus be used for luggage. The greater weight on the driving wheels brought advantages when going uphill on snow, for example: and the ŠKODA 1000 MB was born. The rear-engine design remained in production until 1990.

It’s no exaggeration to say that 1987 brought a revolutionary change in the company’s history. With its modern design, the new FAVORIT model met the demands of customers on even the most demanding markets. Concentrating the engine and transmission at the front driving wheels was in line with the trends of the day. What’s more, it paved the way for a larger number of body design versions and engines as well. This brand new generation of ŠKODA vehicles was pioneered by the FAVORIT hatchback, followed by the FORMAN estate and PICK-UP utility vehicle. These were the result of the company’s own development, with specific input from specialised collaborating firms, including Porsche or the Italian Bertone design studio.