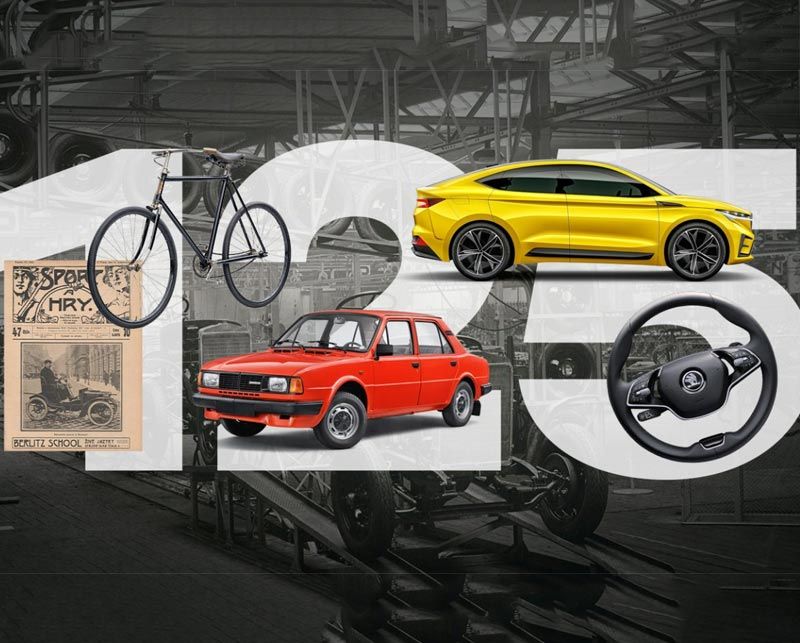 This year sees the 125th anniversary of ŠKODA. The success of ŠKODA is partly down to the countless transformations the company has gone through at various levels during its 125-year existence. Over the next few weeks we’ll take a look back at some truly fundamental transformations.

1895 From repairing bicycles to making them

Locksmith Václav Laurin and the three years younger bookseller Václav Klement were united by a passion for cycling and a desire to produce their own bicycle, made from the best materials available, high-quality, durable, yet affordable. They started out before Christmas in 1895 in a small repair shop in Mladá Boleslav with five employees. Just a year later they were already offering five SLAVIA bicycle models made by 21 employees. But that was just the start of countless new models and services for customers that were to follow.

1899 From bicycles to motorcycles

The two founders soon wanted more than just a wide range of bicycles, from models for children and women to tandems, bicycles with either chain or shaft drive systems, and even tricycles for transporting goods. In 1899 they replaced pedal power with a compact petrol engine. After painstaking experimentation, the talented technician Laurin became the first in the world to hit on the ideal placement of the power unit on the lower part of the frame. Right from the start, customers could choose between two designs offering a power output of either 1.2 or 1.75 horsepower.

In the heyday of the LAURIN & KLEMENT motorcycle era, the constructors initiated another, literally revolutionary change – their own automobile. The light but speedy new car called the L&K VOITURETTE A was powered by a two-cylinder one-litre engine that could deliver a top speed of 40 km/h. Like its motorcycle brothers, it sold well at home and abroad. Soon afterwards, the firm’s constructors had designed four-cylinder and luxury eight-cylinder engines, and L&K cars were notching up one success after another, in terms of both sales and wins on the racetrack. The marque had become the biggest motor works in the Austro-Hungarian Empire. As in the case of its motorcycles, the company relied only on its own development work to make cars rather than production under licence.

After two decades of expansion, the company was rocked by the shockwaves of World War I and the collapse of traditional markets, including its domestic market, which shrank from an empire of 53 million people to the Czechoslovak Republic with just one fifth of that population. What’s more, production in the factory was paralysed by a fire. These factors led to a decision to find a strategic partner. LAURIN & KLEMENT found one in one of the biggest machine engineering and armaments firms in Central Europe, the Pilsen-based giant ŠKODA with French co-owners. A mutually beneficial partnership was formed. The winged arrow in the logo symbolised speed and progress - ideal for the Mladá Boleslav motor works.