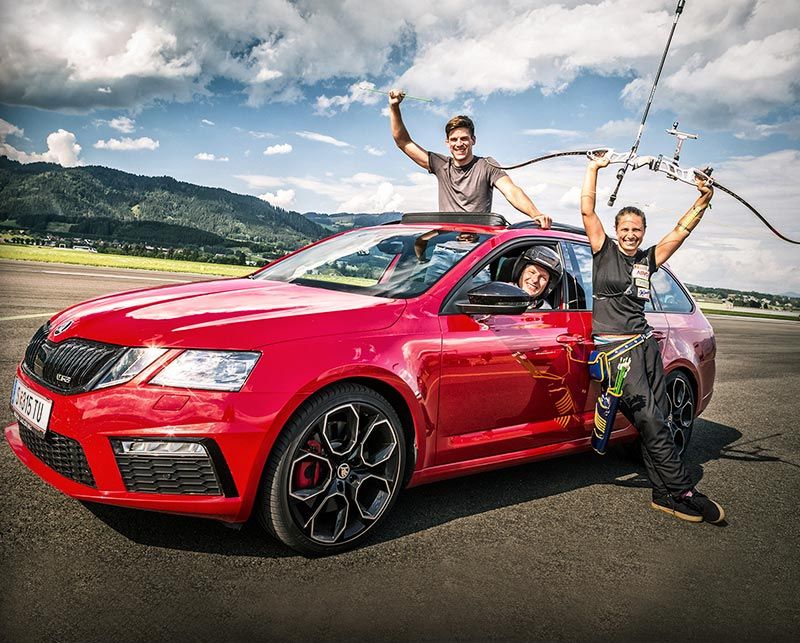 Catch an arrow in flight. With your bare hands. From a moving car. At a speed of 215 kilometres per hour. Impossible? A challenge for brave athletes and the fastest version of the ŠKODA OCTAVIA.

“ŠKODA is known as the brand with a winged arrow in its logo. We wanted to try something that no one else had ever done before, and to extend the logo’s reach to a wide audience,” says Gregor Waidacher, ŠKODA Communications Manager in Austria, as he explains how the idea came about.

This brainwave was then followed by four months of planning, organisation and testing. Selecting the right team was an important factor. “Our selection criterion for the archer was obvious: we had to have the best Austria could offer,” notes Waidacher, recalling how the Olympian Laurence Baldauff was brought on board.

Markus Haas, a martial arts coach with lightning-speed reflexes, was chosen to catch the arrow. The team was rounded off by Guido Gluschitsch, a seasoned driver skilled in precision driving and drifting, who also works as a driving instructor. Of course, the record wouldn’t have been possible without the ŠKODA OCTAVIA COMBI RS 245, the fastest member of the OCTAVIA family.

Then the whole team was ready to go to Zeltweg, the largest military air base in Austria, and begin their record-breaking attempt on the 2.8-kilometre-long runway here. As you can see in the video above in this article, quite some shots were needed to synchronize the record team. However, focus and perseverance won the day and set a record, as confirmed by a representative of the GUINNESS WORLD RECORDS™ Book.

“It was the logo’s arrow that inspired us this time. When I picture ŠKODA’s future models, I think we will find plenty inspiration for new ideas. It’s going to be gripping,” says Gregor Waidacher, inviting us to imagine the future and, perhaps, the new daredevil feats that await us.