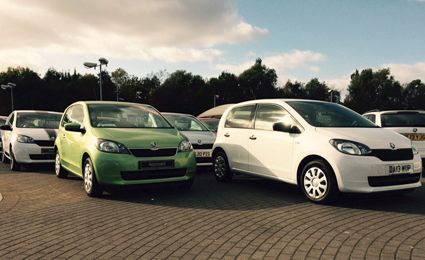 Derek Slack Motors are pleased to announce the SKODA Citigo and Yeti have scooped three wins in this year’s Auto Express used car awards. Citigo coming out on top in the category for ‘best used city car’, while the Yeti was named ‘best used crossover’ and overall ‘used car of the year’. So if you’re in the market for a reliable- value for money pre-owned vehicle, look no further the your local SKODA main dealer in Middlesbrough.

Auto Express described the Citigo as exceptional value for money. “Cars in this highly competitive class are unlikely to be among the most glamorous on the road, but the ŠKODA is smartly styled and solidly built... second-hand buyers will be in safe hands with this compact four-seater,” said the magazine

Talking about the overall winner, Auto Express said: “The Yeti has more than proven itself as a new car, and today it’s more desirable than ever as a second-hand buy, which is why it’s our 2015 used car of the year. The ownership experience is first class – the Yeti is a three-time winner of our Driver Power survey – plus the dealer network is rated highly.”

Nick O''Neill, who recently joined the brand as National Used Car Manager, said: “These awards prove what we and the retail network have always known – that ŠKODA cars are brilliant buys for anyone wanting great-quality, value-for-money used cars.

“The Citigo provides thrift and style for those driving in built-up areas, while the Yeti ticks all the boxes for families needing a robust, well-specified car that can handle anything they throw at it.”

Stephen Orton, Sales Manager at Derek Slack Motors, delivering SKODA for nearly 25 years said, “ SKODA ticks all the right boxes for both the new and second hand buyer. What’s more, if you buy any used SKODA from Derek Slack Motors we’ll even through in two match-day hospitality tickets for a Boro game.”

Full details of the awards are in the magazine and on the Auto Express website.