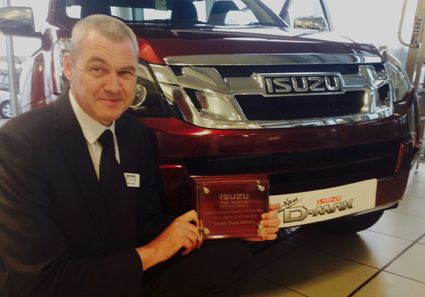 Derek Slack Motors, (main dealers for Isuzu on Teesside and North Yorkshire) enjoyed a record-breaking year of Isuzu sales during 2014.  In recognition, the dealership received an Isuzu, 2014, ‘Highly Commended Dealer of the Year’ award, presented at the Isuzu Awards Dinner on Thursday 15th January 2015 held aboard the Cutty Shark, Greenwich.

Tony Slack-Dealer Principle said, “Receiving this award is especially exciting because it takes into account all the hard work and effort that Derek Slack Motors and Isuzu have put into promoting the Isuzu brand, coinciding with Isuzu UK’s own twenty-two year sales record, outperforming both Ford and Nissan to enjoy its best ever market share.”

Tony continued, “Demand for the D-Max in the first quarter of the year was so strong that by the end of March we decided to raise our sales forecast. Throughout the second and third period demand remained as strong as ever, accumulating in our best year ever.”

Tony continued, “I believe Derek Slack Motors - Isuzu success story is due in part, to our close proximity to both large urban and rural communities. The Isuzu D-Max is designed for rough terrain, so it’s no surprise the D-Max has become popular with construction companies and farmers with its pulling power and workhorse capabilities, offering reliability, durability and economy.”