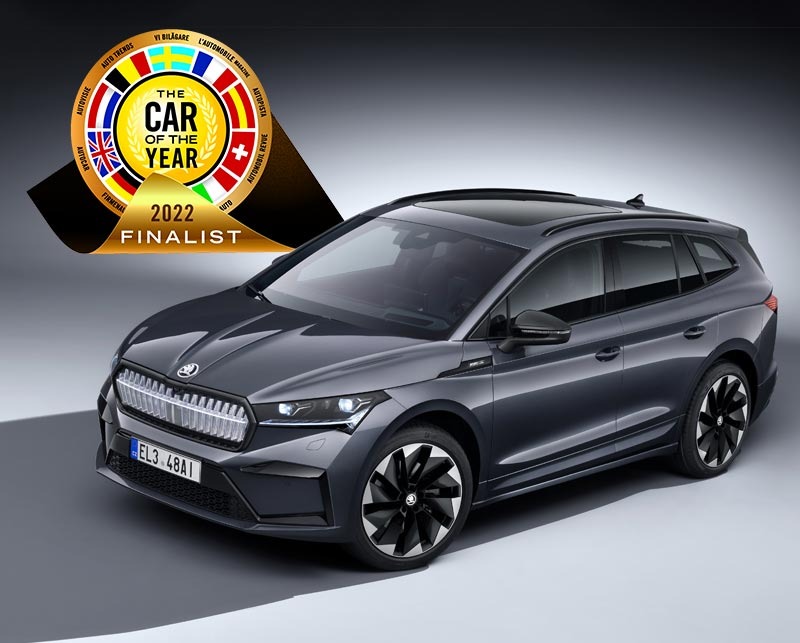 Enyaq 'Car of the Year' Nomination

After winning the ‘Golden Steering Wheel 2021’, the ŠKODA ENYAQ iV has now also been nominated for the ‘Car of the Year‘ award. The prize has been presented annually by nine European automotive trade magazines since 1963. Out of 65 new cars from the past year that were nominated, the ŠKODA ENYAQ iV has been shortlisted for the final as one of the seven best models. The winner is chosen by an international jury of 61 automotive journalists from 23 European countries. The Car of the Year 2022 will be announced in Geneva at the end of February 2022.

The Car of the Year Award is one of the most important automotive awards in Europe and has been held every year since 1963. Initially, the list for the ‘Car of the Year 2022‘ included 65 new vehicles that have been introduced over the past 12 months. The seven finalists have now been selected: On the heels of the ŠKODA OCTAVIA last year, the ŠKODA ENYAQ iV is another model from the Czech manufacturer to reach the final round. The jury consists of 61 automotive journalists from 23 European countries, the number of members from each country depends on the size of the respective market – six jurors each from Germany, France, Great Britain, Italy and Spain. The award ceremony will be held at the end of February 2022.

The all-electric ŠKODA ENYAQ iV represents the most significant step to date in the roll-out of the Czech manufacturer’s electrification strategy. The SUV is ŠKODA’s first production model to be based on the Volkswagen Group’s Modular Electrification Toolkit (MEB) and is built at the main ŠKODA plant in Mladá Boleslav. This makes the ENYAQ iV the only MEB model in Europe to be manufactured outside of Germany. It comes with rear-wheel drive or all-wheel drive, a choice of three battery sizes and five performance levels from 109 to 220 kW. With a range of more than 520 kilometres in the WLTP cycle, the ENYAQ iV is ideal for long-distance travel.

Being nominated as one of the final seven models in the ‘Car of the Year’ award marks another success for the ŠKODA ENYAQ iV; at the beginning of November, it was named the best electric SUV, winning the internationally renowned Golden Steering Wheel 2021.