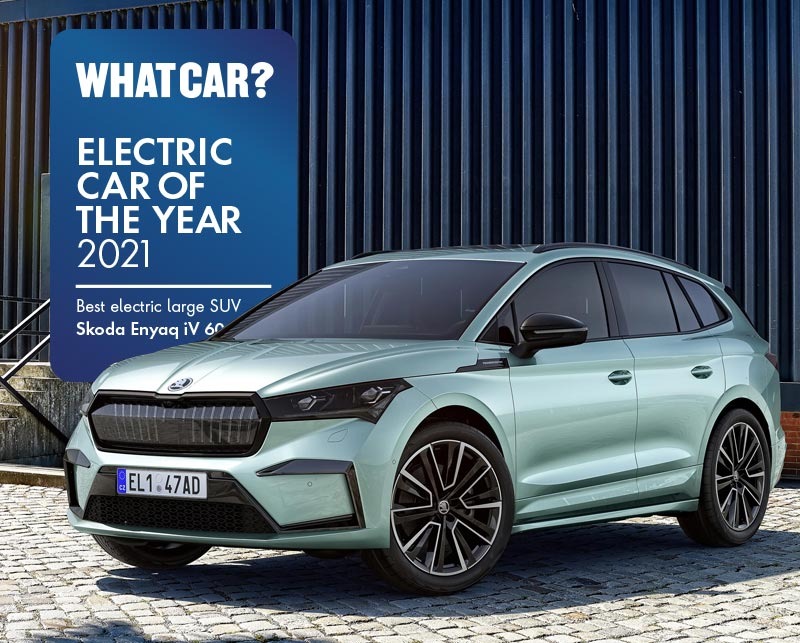 Two of ŠKODA’s new generation of electrified models have been awarded top honours at the What Car? Electric Car Awards. The all-new Enyaq iV and Octavia iV plug-in hybrid proved unbeatable in their respective categories, comfortably outscoring rivals to add to their growing collection of industry silverware.

Leading the charge was the all-new ENYAQ iV, which was named the UK’s Best Electric Large SUV. The judging panel praised the ENYAQ iV’s design, practicality and ease of use, with Editor Steve Huntingford commenting: “The ENYAQ does everything you need an SUV to do without fuss or fanfare. On the inside, the ENYAQ is massive. That means it can carry a family of four or five with their luggage without any drama. The stardust that brings all the elements together is undoubtedly the price. The reason we love the ENYAQ iV 60 is that you can have a well-equipped car that’s bigger than its class competitors for the same money as models from the segment below.”

Recording a second What Car? victory for an iV-badged ŠKODA, the OCTAVIA iV was named Best Hybrid Estate. The plug-in hybrid OCTAVIA has proved incredibly popular since its arrival last year and continues to offer a unique combination of efficiency, practicality and value for money.

“If there’s one model that represents ŠKODA at its very best, we reckon it has to be the OCTAVIA estate.” commented Steve Huntingford on announcing the OCTAVIA’s win. “The iV is serene when running in electric-only mode, and the motor is powerful enough to get you up to motorway speeds without a fuss. The OCTAVIA’s healthy electric range leads to an official CO2 output of just 23gkm, placing it in an exceptionally low 6% benefit-in-kind tax bracket and paring monthly payments to the bone.”