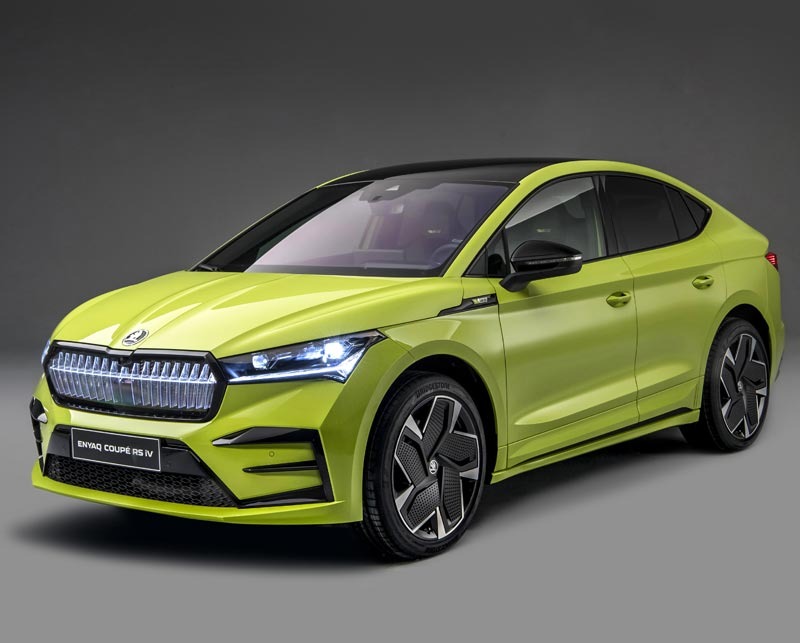 Following the successful launch of the ENYAQ iV, ŠKODA is now adding an elegant coupé to the range. The line-up will also include a sporty vRS variant. The ŠKODA ENYAQ COUPÉ iV features an even more emotive design and, displaying sporty lines, generous space and a boot capacity of 570 l. At a value of 0.234, its drag coefficient (cd) has also been improved in comparison to the ENYAQ iV SUV. Depending on specification, this enables a range of up to 339 miles*** in the WLTP cycle, making the car perfectly suitable for travelling long distances. In the UK the coupé will be available with one battery size and a choice of rear- or all-wheel drive, and three power outputs ranging from 150 kW* to 220 kW** (vRS variant) for the ENYAQ COUPÉ iV. As with the ENYAQ iV, Design Selections replace the classic trim levels for the interior.

Thomas Schäfer, ŠKODA AUTO CEO, says: “Following the successful launch of the SUV, the new ENYAQ COUPÉ iV brings even more emotiveness, sports styling and elegance to the ŠKODA iV family. Our designers and engineers have once again succeeded in combining a high degree of functionality with an emotive design. The brand-new range-topping model is also the first-ever all-electric ŠKODA vRS. The ENYAQ COUPÉ iV perfectly combines emotion with efficiency, offering the ŠKODA-typical generous amounts of space, even in a particularly elegant body.”

The new ŠKODA ENYAQ COUPÉ iV and the ENYAQ iV are produced at ŠKODA’s main plant in Mladá Boleslav, making them the only MEB-based Volkswagen Group vehicles in Europe to be built outside of Germany. Due to its composition and a long wheelbase, the MEB modular electric car platform enables new options in terms of body proportions and design. As the high-voltage battery for the drive system is fully incorporated into the underbody, and because electric vehicles don’t have a transmission tunnel, the space available for rear-seat passengers is also particularly generous.

Dark tinted panoramic glass roof as standard and gently rearward sloping roofline
The new ŠKODA ENYAQ COUPÉ iV features an even more emotive design than the SUV variant and, in addition to a SportLine derivative, is also available as an athletic range-topping model, the ENYAQ COUPÉ iV vRS. This model features a discrete sporty front apron as well as body‑coloured side skirts and is equipped with alloy wheels measuring between 19 and 21 inches. From the B-pillar, the roofline gently slopes towards the rear and merges with the tailgate that features a sharp trailing edge. The vehicle’s lines are further accentuated by the dark tinted panoramic glass roof, which is a standard feature for the coupé. It is the largest panoramic glass roof in the ŠKODA range, spanning the entire roof and seamlessly merging with the rear window. It is thinner than the full roof, providing plenty of headroom for the car’s occupants. The panoramic glass roof allows more daylight into the interior, giving the car a more airy feel. Its coating helps to ensure that the climate within the cabin is pleasant at all times. Just as with the ENYAQ iV, the coupé is available with the optional Crystal Face where the vertical ribs of the striking ŠKODA grille are illuminated by 131 LEDs, while a horizontal light strip rounds off the car’s stunning look. The ENYAQ COUPÉ iV vRS comes with the Crystal Face as standard.