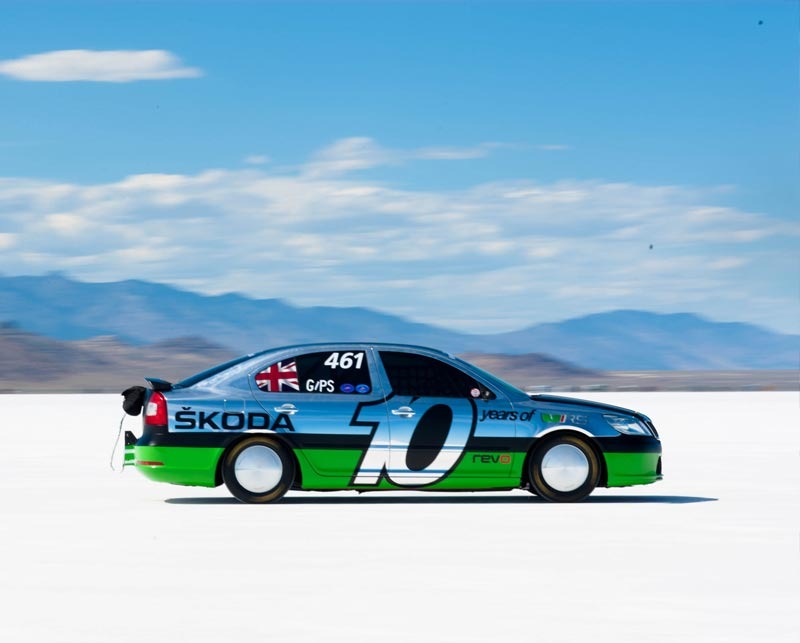 To mark the occasion, ŠKODA UK has completed a restoration of the 2011 Octavia vRS, returning it to the same specification that completed the final run along the world-famous salt flats. The freshly restored racer was put through its paces at Millbrook Proving Ground’s high-speed bowl by members of the motoring press, alongside a selection of some of ŠKODA’s greatest performance models past and present marking the 20th anniversary of vRS in the UK.

Recalling ŠKODA’s record-breaking visit to Bonneville, Meaden said: “Driving the salt flats was a dream come true. It always felt like a privilege to be allowed to charge flat-out down the salt. Knowing how much passion and hard work went into getting the Octavia to Speed Week made that privilege all the greater. I’m incredibly proud of what we all achieved and will never forget how it felt to break a record or to be part of such an exceptional group of people.”

Although the 2011 ‘Salt spec’ Octavia became the first ŠKODA to hold an official Land Speed Record – beating the previous benchmark by more than 11 seconds – the original target for the ŠKODA UK team was to break the 200mph barrier. Indeed, it was only after the car eased past the famous ‘double century’ in early runs that the team realised that the existing record might be beatable. The Octavia vRS’ record-breaking run consisted of two official sprints of Bonneville's famous five-mile course: the first at 225.513mph on Thursday 18 August, with the return at 228.647mph on Friday 19 August.

The car itself – a Corrida Red Octavia vRS 2.0 TSI – was originally destined to join the ŠKODA UK press fleet before being requisitioned for the Bonneville project. Although based on a production Octavia vRS 2.0 TSI, the ‘Bonneville special’ required extensive modification for the record attempt. Under the regulations set out by the Southern California Timing Association, only a certain number of modifications were permitted. Adding to the challenge was the fact that the Octavia’s 2.0 TSI engine was so new at the time that very few motorsport or high performance upgrades were available from external suppliers.

Working to an almost impossibly tight deadline, key upgrades included an injection system altered to deliver more fuel to the engine (eight injectors), and a cooling system which benefited from the addition of a 10-litre radiator. The longer-geared transmission from an Octavia GreenLine was also installed to enable a higher top speed, while the traditional brake discs and calipers were removed and replaced by a parachute to ensure the car could safely stop on the salt surface. Operated by a lever in the cabin, this had the added advantages of reducing excess drag, unsprung weight and friction.

The Milton Keynes-based ŠKODA UK team behind the racer spent the days leading up to Bonneville’s famous Speed Week putting the car through a rigorous dyno programme with the assistance of performance software and tuning outfit specialist REVO Technik.

The record-breaking Octavia vRS Bonneville Special forms part of the ŠKODA UK heritage fleet that features a collection of ground-breaking models dating back to 1929.