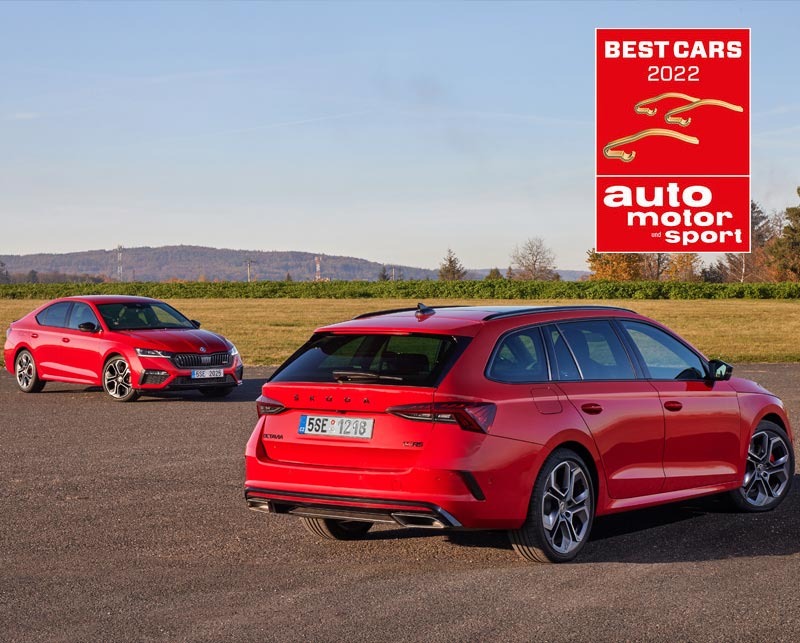 A special triumph for the ŠKODA OCTAVIA: this latest win marks the tenth time Škoda’s best-seller has won the renowned “Best Cars” readers’ poll organised by German car magazine “auto motor und sport”. In what was the 46th edition of this poll, more than 100,000 readers and online users cast their votes and once again ranked the OCTAVIA in first place for the import category of the “compact class”. A total of 386 models in twelve categories were eligible for the “Best Cars 2022” poll.

Following up on its successful debut in 2021, the fourth generation of ŠKODA’s best-selling model once again took first place in the import ranking of the 2022 “compact class” category. The ŠKODA OCTAVIA and another model from the Volkswagen Group each received 12.2 per cent of the votes from over 100,000 readers and online users of “auto motor und sport,” sharing this year’s victory ahead of 26 competitors. This now marks the tenth “Best Cars” title for the OCTAVIA: nine times as the best import model in the “compact class” and once as the best import vehicle in the “mid-sized car” category. Presented in 2020, the fourth generation of the ŠKODA best-seller is more spacious, safer, better connected and emotionally more appealing than ever before. Available in hatchback and COMBI estate format, the OCTAVIA comes not only with efficient petrol and diesel engines, but can also be ordered as a natural-gas version as well as with mild-hybrid and plug-in hybrid technology.

ŠKODA OCTAVIA continues to collect awards
The fourth-generation OCTAVIA continued the successful streak begun in its debut year by collecting further prestigious awards in 2021. At the “Auto Trophy 2021” awards of German car magazine “Auto Zeitung” it was once again crowned the best import vehicle in the “compact models” category, winning its eighth trophy in succession in this readers’ poll, and its fourteenth overall. Earlier that year it had won its eleventh title overall as the best imported fleet vehicle in the compact class at the “Company Car of the Year 2021” awards of German trade magazine “firmenauto”.