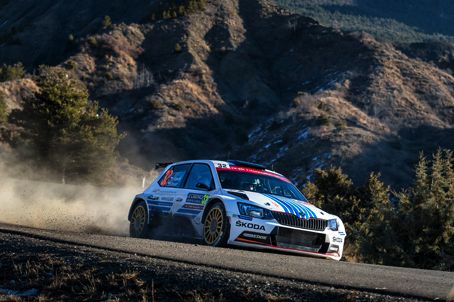 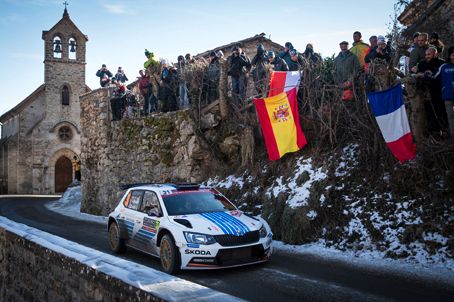 Monte Carlo, 22 January 2017 – A day of celebration in the Principality of Monaco: Andreas Mikkelsen has set a milestone in the ŠKODA Motorsport success story. Starting in the ŠKODA FABIA R5 for the first time, the Norwegian rally star triumphed with navigator Anders Jæger (N) in the WRC 2 standings at the 85th Rally Monte Carlo. Team-mates Jan Kopecký/Pavel Dresler (CZ/CZ) completed the one-two victory for ŠKODA at the oldest and most prestigious race in the FIA World Rally Championship (WRC 2). 40 years previously, Václav Blahna (CZ) and his co-driver Lubislav Hlávka (CZ) had driven the ŠKODA 130 RS to victory in the 1,300cc class at the same location.

“This one-two victory at the Rally Monte Carlo is one of the high points in our 116 years of motorsport history. The ‘Monte’ is the most famous rally in the world and it is really special to win here. Respect to Andreas Mikkelsen and Anders Jæger, who showed their class and outstanding speed under the most difficult of conditions,” commented Michal Hrabánek. The ŠKODA Motorsport Director praised the performance of the whole team: “The whole team did an outstanding job, from the mechanics and engineers to our two works duos with Jan Kopecký and Pavel Dresler, as well as Pontus Tidemand and Jonas Andersson. Of course, this is the best possible start to the new rally year 2017.”

And it was the perfect way to celebrate ŠKODA’s triumph at the “Monte” four decades ago. The three FABIA R5s of the works teams commemorated the 1977 success with a special blue and red striped livery. The thousands of fans loved the spectacular new look but were also delighted by the performance of the turbo 4x4 from ŠKODA. As it had been throughout the rally year 2016, the FABIA R5 was the best car in its class. Under extremely difficult conditions - icy stretches were interspersed with soft snow and clean asphalt on the Alpine switchbacks - ŠKODA driver Andreas Mikkelsen moved straight into the lead with the best time on the first timed special stage on Thursday. The 27-year-old Norwegian extended his lead with outstanding best times and was able to celebrate a dominant win on Sunday after 350 kilometres. Mikkelsen/ Jæger claimed victory 3:25.4 minutes ahead of their team-mates Kopecký/Dresler.

“ŠKODA opened the door to the big rally world for me and it is a special feeling for me to return with this triumph. Thanks to the whole team. I am happy to give ŠKODA this success at the legendary ‘Monte’. The ŠKODA FABIA R5 is a good rally car and I am satisfied with our performance,” commented Mikkelsen, who also successfully completed the legendary climb on the Col de Turini on Sunday, in heavy snowfall at over 1600 metres. He secured four team world championship titles with Volkswagen Motorsport, having already won the Intercontinental Rally Challenge in the ŠKODA FABIA SUPER 2000 in 2011 and 2012. He has now recorded his first class win in the FABIA R5 at the Rally Monte Carlo, celebrating at the awards ceremony on the “Place du Palais Princier”.

Jan Kopecký was almost as delighted: “It is great for ŠKODA to head home with a one-two victory at the Rally Monte Carlo.” The other ŠKODA works driver Pontus Tidemand (S) was not competing for WRC 2 points at his first “Monte” but he and co-driver Jonas Andersson (S) emphasised their ability by finishing eleventh in the overall standings. Tidemand/Andersson will be battling for WRC 2 points at their home World Championship rally in Sweden from 9th to 12th February: “It is no secret that we want to challenge for the WRC 2 title.” Last year, the ŠKODA Motorsport works team of Esapekka Lappi/Janne Ferm (FIN/FIN) won the WRC 2 title in the drivers’ and co-drivers’ competitions for the first time. The rally year 2017 has begun with another historic triumph.