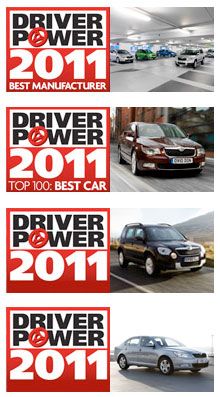 Results of the 2011 Driver Power survey

It’s been a year of awards for Derek Slack Motors and Skoda. Recently voted number one in the UK for Skoda customer satisfaction, the motoring public have now given Skoda the majority vote too.

Thousands of motorists took part in the Auto Express’ ‘Driver Power’ poll in search of the most reliable vehicles. The poll highlights some of UK’s best cars and manufacturers, along with the most affordable and economical vehicles. Already in its 10th year, the poll is widely regarded as one of the most reliable surveys of its kind as it’s rated by you, the very people who own the vehicles!

So it was no surprise to learn the car which came first was none other than a Skoda in the shape of the Superb Hatchback with its clever tailgate which opens as either a saloon or a hatchback.

Derek Slack Motors can also announce Skoda picked up three awards in total in the UK’s top ten vehicle category. The results are as follows:

We’re also delighted to announce Skoda picked up the much coveted, Best Manufacturer in the UK award in the Auto Express Driver Power survey for the third year running.