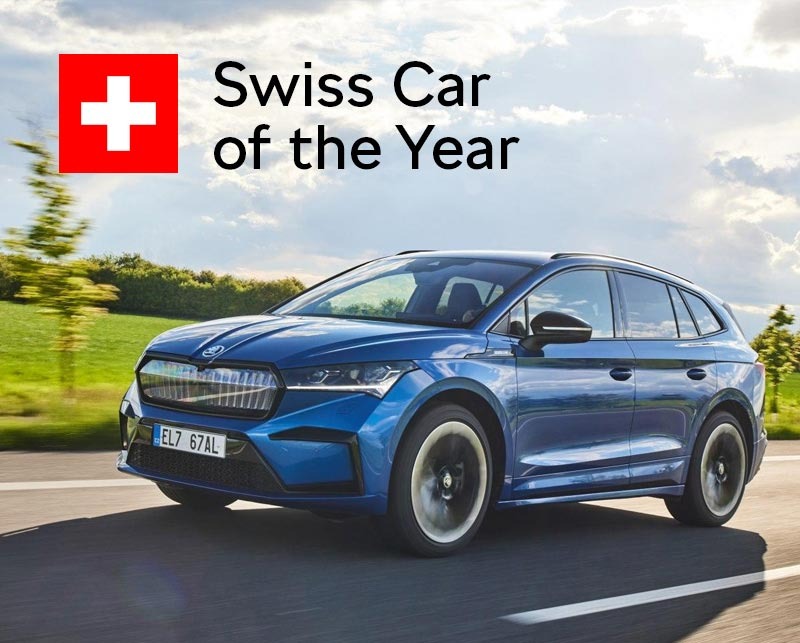 The ENYAQ iV is ‘Switzerland’s Favourite Car of 2022’, securing the second successive victory for ŠKODA in the popular readers’ poll of several Swiss media outlets after the OCTAVIA won last year. The award was presented in the eleventh run of the ‘Swiss Car of the Year’ awards. Around 30,000 readers and users voted in the poll, in which ŠKODA’s first all-electric SUV secured 3.6 per cent of the votes ahead of a strong field of entrants that included 55 new cars.

The Swiss magazine ‘Schweizer Illustrierte’, along with ‘AutoScout24’, ‘Blick’, ‘L’Illustré’, ‘Il caffè’ and ‘SonntagsBlick’, held the eleventh run of the readers’ poll for ‘Switzerland’s Favourite Car’. The ‘Swiss Car of the Year’ award ceremony took place online as it did last year due to COVID-19. The ŠKODA ENYAQ iV won over a majority of the approximately 30,000 readers and users, garnering 3.6 per cent of the votes. It takes the baton from the ŠKODA OCTAVIA, which last year became the first ŠKODA ever to win the title of ‘Switzerland’s Favourite Car’. The vehicles nominated for ‘Switzerland’s Favourite Car of 2022’ are all new models that were launched on the Swiss market in 2021 or can be ordered by March 2022 at the latest.

ŠKODA has entered an electrifying new era with the ENYAQ iV. The all-electric SUV is ŠKODA’s first production model to be based on the Volkswagen Group’s Modular Electrification Toolkit (MEB) and is built at the main ŠKODA plant in Mladá Boleslav. This makes the ENYAQ iV the only MEB model in Europe to be manufactured outside Germany. It comes with rear- or all-wheel drive, and also offers a choice of five power levels from 109 to 220 kW and three battery sizes. Its range of more than 520 kilometres in the WLTP cycle ensures its suitability for long-distance travel.

ŠKODA ENYAQ iV continues its string of successes at international award ceremonies
Being voted ‘Favourite Car of Switzerland 2022’ is the fourth high-profile award for the ENYAQ iV in just over three months. The new electric flagship has also been awarded the 2021 Golden Steering Wheel as the best E-SUV by the trade magazine ‘Auto Bild’ and ‘Bild am Sonntag’ in Germany, ŠKODA’s most important single market in Europe. In the ‘Auto Trophy 2021’, organised by the trade magazine ‘Auto Zeitung’, the ENYAQ iV celebrated overall victory as the best E-SUV up to 50,000 euros and also won the import classification. In the poll for the ‘Family Car of the Year’ by the trade magazine ‘AUTO Straßenverkehr’, it took overall victory in the category ‘Best Technology’ for vehicles up to 25,000 euros, also winning the import ranking in this class as well as the ‘Best Design’ category. The ENYAQ iV has qualified for the finals of the European ‘Car of the Year’ award as one of the seven best models, with the winner being chosen and announced in February 2022.

Click here to watch the video of the award ceremony for ‘Switzerland’s Favourite Car of 2022’.