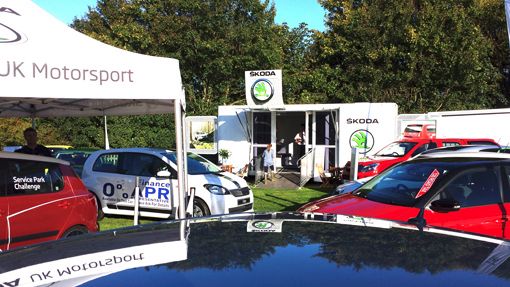 The 143rd Stokesley Show took place Saturday, 19 September, with around 20,000 visitors pouring into the old showground. Derek Slack Motors were just one of 120 trade stands at this year’s show which also featured over 380 horses, including plenty horse power of our own, in the shape of SKODA and ISUZU.

Offering something for everyone, the sun drenched show featured lots of demonstrations including chainsaws woodcarving, birds of prey and vintage tractors plus, prizes for horse and pony riding, show jumping, cattle, sheep, handicrafts, art and much more.

“It was another fabulous, well organised event”, said Tony Slack, Managing Director of the Middlesbrough dealership. There’s always something new to see and our stand was no exception, featuring the new Superb which was only officially launched the previous day attracting lots of attention.”

Mark Hayter-ISUZU, Pick-up Professional said, “It was the first time we’d taken the new special edition D-Max Fury, out on the road. The luxury pick-up features some of the latest technology and certainly caused a buzz amongst the 4 wheel drive fraternity.

Tony added, “We’d like to thank everyone who came over to visit during the show, we made lots of new friends and caught up with many old too. Next year’s show will be on the 17 September, so make a note in your diary.”