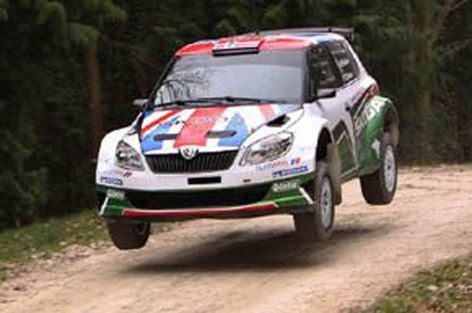 Win a pair of Goodwood Festival of Speed tickets

This is the first time Skoda been an official partner at the annual event, which brings together star names, tens of thousands of spectators and the cream of the world’s motoring manufacturers.
Škoda is creating a spectacular loose-surfaced rally stage on the Goodwood estate – the ‘Goodwood Forest Rally Stage presented by Škoda’. Rally driving is becoming an increasingly popular element of the Festival of Speed, and the stage will be designed to give visitors close-up views of the cars and drivers in action.

Škoda UK Motorsport driver Andreas Mikkelsen will drive the team’s 2011 Fabia S2000 on the hill and on the rally stage. We also plan to have some of our historic rally cars driven at the event – including the 1959 Škoda 1100 OHC Spider, which has only been on static display in recent years.

Officials will use four-wheel-drive Yetis and Superb Estates to keep the rally stage running like clockwork, and we will have a major display in the manufacturers’ arena to showcase our range of award-winning cars.

Derek Slack Motors have 5 pairs of tickets to giveaway in our free to enter prize draw. Simply test drive any pre-owned vehicle this weekend, and we’ll put your name into the raffle which will be drawn on Monday 27th of June. No purchase necessary.

Dealer Principle - Tony Slack said: “With such a passion for cars, a rich motorsport heritage and a desire to innovate and entertain, a partnership between Škoda and the Goodwood Festival of Speed was a very natural step for both parties. The Goodwood Festival of Speed will be a major event for Škoda in 2011 and we are looking forward to celebrating Skoda’s 110th motorsport anniversary with the tens of thousands of motorsport fans who will be at Goodwood this summer.”